The JS Movement commemorates the 2d anniversary of his passing 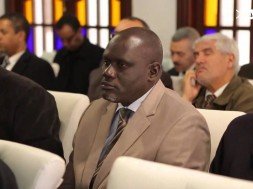 The JS Movement commemorates the 2d anniversary of his passing

In memory of Imam Abdessalam Yassine –may God have mercy upon his soul– the Justice and Spirituality Movement commemorates the second anniversary of his passing in the headquarters of the movement in Salé. The subject for this commemoration is about Change in the Imam’s theory of the Prophetic Method.
This year we have chosen a specific topic, ‘Change in Imam Abdessalam Yassine’s theory of the Prophetic Method’. Of course, everyone knows that the umma is now in utter need of this subject both practically and theoretically.
Political, intellectual and human rights activists from inside and outside Morocco have thronged to the headquarters of the Movement to commemorate the second anniversary of an august man who has bequeathed a rich, scientific and intellectual legacy.
Indeed we were honored by the presence of a group of men of thought from inside and outside; from among the high caliber of this umma. we ask God the Almighty to accept from all.
We tell the attendees: ‘May you be happy, and may your walking be blessed’.
The organizers were keen on expanding the circle of the invitees taking into consideration the Imam’s incessant persistence on rallying the umma and communicating with its diverse elements. But the authorities, as usual, refused to give us the permission to organize it in a public place.
We have tried to organize this commemoration in a wider place and did not even choose or ask for a public place, we rather requested a simple private hall. But of course, prohibition is an intrinsic trait in the regime.
This international scientific symposium deals with the theoretical issues of change.
This memorial event has started with two major topics in program: the first one is entitled: “The Theoretical Issues of Change” and the second is an interactive round-table discussions about “The Current Issues of Change”.